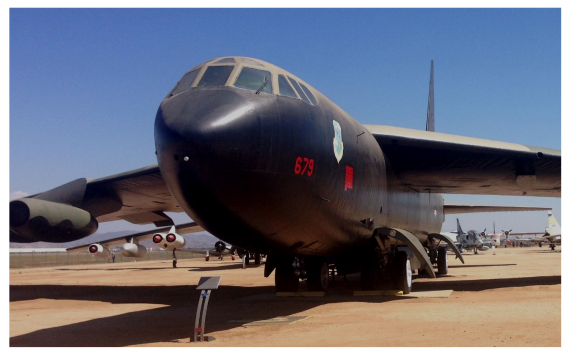 Designed in the early years of the Cold War, the massive eight-engine Boeing B-52 Stratofortress with its crew of six was intended as a high-altitude, intercontinental, strategic bomber capable of launching devastating nuclear attacks against targets deep inside the Soviet Union. Throughout the Cold War, B-52s served as the third element of the United States nuclear triad defense consisting of Intercontinental Ballistic Missiles, Submarine Launched Ballistic Missiles and strategic bombers. Yet, B-52’s have never dropped a nuclear weapon in anger.

Relying on speed and electronic counter-measures systems for its primary defense, the aircraft is the last bomber in U.S. history to use an air gunner (gun turret in the tail). The internal bomb bay was designed to carry up to 27,000 pounds of nuclear weapons. Modifications increased this capacity to over 40,000 pounds, wing-pylons carry an additional 18,000 pounds of bombs or missiles. The four top deck crew members, pilot, co-pilot, electronic counter measures and gunner eject upward. The navigator and bombardier eject downward from the lower level, making for uncomfortable ejections at low altitudes. 700-gallon wing tanks require wing-tip trailing wheels on landing and take-off. The droopy wings level off on take-off and move up to 15 feet as speed increases to over 500 mph. The four twin landing gear “trucks” can be turned to "crab" the aircraft in a crosswind landing. The B-52’s engines have no thrust reversers, so a very long runway, and a drag chute, is needed to help stop the aircraft on landing. With an 8,800-mile basic range the addition of air-to-air refueling makes the Stratofortress a truly global aircraft.

Undergoing continuous modification since it first entered service in 1955, improvements in low-level operations, conventional bombing, range and defensive and offensive systems have allowed the Stratofortress to play an important role in conflicts around the world. From the sweltering jungles of Southeast Asia to the arid wastelands of Iraq, from the dense forests of Yugoslavia to the rocky precipices of the Hindu Kush the 70,000-pound bomb load of the B-52 has supported generations of American fighting men as a tactical bomber directly targeting enemy formations and supply routes.

Today, the longest-lived front-line bomber in aviation history, a total of 744 B-52s were produced by Boeing at its Seattle, Washington and Wichita, Kansas plants before aircraft production ceased in 1962. Today, 76 B-52H models are still in-service with the Air Force expecting them to continue until 2040.

The museum's B-52D, serial number 55-0679, was manufactured by Boeing Aircraft, Wichita, Kansas and delivered to the Air Force on June 5, 1957. During the Vietnam Conflict, it flew 175 combat missions in 41 months from November 1966 to October 1973. In 1975, it was involved in a ground mishap at March AFB that resulted in a broken wing spar permanently grounding the aircraft. 55-0679 last served as a weapons loading trainer before it was declared surplus and assigned to the museum. This aircraft is on loan from the NMUSAF