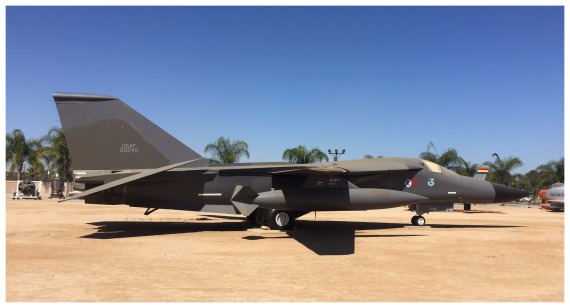 Designed as a modification of the legendary General Dynamics variable–geometry “swing-wing” F-111 fighter-bomber, the FB-111A served in the United States Air Force Strategic Air Command from 1968 until 1991. Intended as a replacement for the B-58 Hustler and as an adjunct to the B-52 Stratofortress until a more advanced nuclear-armed manned bomber could be procured, the FB-111A supported the third leg of the US Triad Nuclear Deterrent strike-force consisting of manned bombers, Inter-Continental Ballistic Missiles and Submarine Launched Ballistic Missiles.

In addition to strengthened landing gear, an increased fuel capacity, lengthened wings and a fuselage over two feet longer than standard F-111 the FB-111A was equipped with advanced electronics including an improved attack radar, internal navigation system, digital computers and multi-function displays to support its role as a nuclear-armed strategic bomber. Its variable wing design, extending out for slow-speeds and sweeping back for high-speeds, allowed the aircraft to operate a peak performance in sub-sonic and supersonic flight.

Armed with up to six Boeing AGM-69 SRAM, short-range attack missiles with up to a 210-kiloton nuclear warhead each or nuclear gravity bombs, the FB-111A had a total weapons load of 35,500 pounds making it a credible threat to any major adversary. Unofficially nicknamed the “Dark Vark” due to its distinctive dark green and grey Strategic Air Command paint scheme, 76 FB-111A’s were delivered to the USAF before production stopped in 1971.

The museum’s FB-111A serial number 68-245 saw operational service with the 509th and 380th Bomb Wings, Strategic Air Command until retirement in 1991 with 5,685 flight hours. The aircraft is displayed with its original “Ready Teddy” nose art in its “Dark Vark” livery. This aircraft is on loan from the NMUSAF