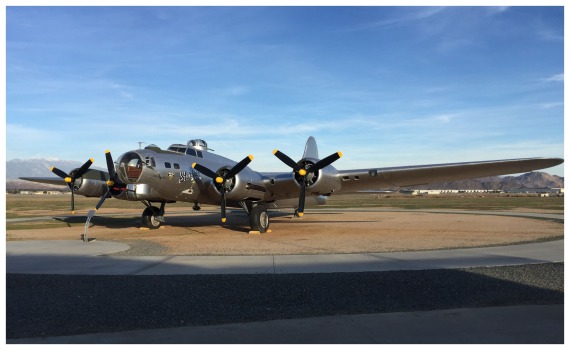 Designed to implement the United States Army Air Corps concept of Strategic Bombing the Boeing B-17 Flying Fortress was the undisputed centerpiece of the U.S. air campaign in Europe during the Second World War. The four-engine heavy bomber carried an impressive 5,000 to 8,000lb bomb load and an extensive defensive armament of up to 13 .50 caliber heavy machine guns. Intended to operate in conjunction with other Fortresses in massive formations, squadrons of B-17s took advantage of inter-locking fields of fire to drive off attacking enemy fighters while precision Norden bombsights dropped high explosive and incendiary bombs on strategic targets in the enemy heartland. Coupled with RAF Bomber Command in its night bombing campaign, USAAF heavy bomber daylight strikes attempted to force Nazi Germany into surrender by crushing domestic industry, war production and the German peoples will to resist.

Heavy fighting brought massive causalities among U.S. bomber crews making participation in the Combined Bomber Offensive one of the most dangerous missions of WW2. By May of 1945, B-17s of the USAAF 8th and 15th Air Forces had delivered over 640,000 pounds of bombs onto enemy targets throughout Europe while B-17 gunners shot down more enemy fighters than any
other Allied aircraft of the war.

Manufactured in Long Beach, California the museum's B-17G serial number 44-6393 was accepted into USAAF service in July of 1944. The aircraft was initially assigned to the 15th Air Force arriving in the Mediterranean Theater of Operations in August of that year. Documented primary source information indicates 44-6393 was acquired as a command transport for the Commander of the Mediterranean Allied Air Forces, Air Force legend General Ira Eaker, as a replacement for B-17E "Yardbird" his prior command aircraft. At the time of the transfer many of the defensive armaments were temporarily removed (including the turrets) and the aircraft received the name "Starduster" a designator it kept as General Eaker's personal transport for the rest of the war. During its service, "Starduster" flew the General from Italy and North Africa to conferences and planning meetings in England, the Soviet Union and the continental United States.

After General Eaker's retirement in 1947, "Starduster" was assigned as a VIP transport to various U.S. bases in the Far East and Canada. Serving until 1956, long after most B-17s had left the USAF inventory; 44-6393 was transferred to storage in Arizona and dropped from the USAF active inventory. In June of 1956, it was transferred to the government of Bolivia where it served and additional 25 years as a cargo transport.

"Starduster" was reacquired by the USAF in January 1981 and flown to the United States for restoration and display at the March AFB Museum. Returned by museum volunteers to its 1944 configuration and graced with General Eaker's "Starduster" nose art. This aircraft is on loan from the NMUSAF

Manufactured by Douglas Aircraft, Long Beach CA and delivered to the USAAF on
22 Jul 1944.