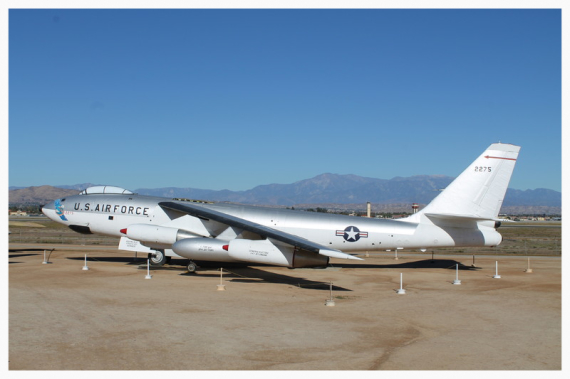 Designed to meet a 1944 requirement for a jet-powered bomber, the first XB-47 prototype flew in December 1947. The sleek aircraft incorporated many advanced features: swept wings, jet engines in underwing pods, centerline fuselage mounted landing gear and automated systems that reduced the standard crew size to three. With its nose-high stance and white painted underside – to reflect the flash from a nuclear explosion – the B-47 was the fiercest looking bomber in USAF history.

Startled by the vulnerability of propeller-driven bombers in Korea, the United States searched for a replacement for the B-29 and B-50 bombers then in-service. The B-47 Stratojet’s 20,000lb payload matched the Superfortress however the 200mph speed advantage promised to make the bomber much less vulnerable to the new generation of jetfighters.

Too late for the Korean War, the B-47 became an important part of the Strategic Air Commands nuclear deterrent force. Lacking the range of SAC's heavy bombers (the B-36 and later the B-52), Stratojet units regularly deployed to forward air operating bases globally on temporary duty. Initially, these deployments lasted three months, but beginning in 1957 under the Reflex Action program, they were shortened to three weeks.

In addition to its role as a nuclear strike bomber, the Stratojet's speed and payload made it a useful strategic reconnaissance aircraft. Between 1952 and 1956, photographic reconnaissance B-47s conducted several overflights of the Soviet Union, providing detailed pictures of Soviet military and industrial facilities. Stratojets gathered intelligence about Soviet air defense systems and the Soviet intercontinental ballistic missile program. Weather reconnaissance versions of the B-47 not only collected weather data, but also took air samples of Soviet nuclear detonations. These essential RB-47 missions over and along the border of the Soviet Union were hazardous, and Soviet fighters damaged one reconnaissance Stratojet and shot down two, with the loss of seven USAF personnel killed and two temporarily imprisoned.

March Field Air Museum’s B-47E, serial number 53-2275. It was built by Boeing Aircraft and was delivered to the Air Force on Valentine’s Day 1955. Over its career it had assignments in Guam, March AFB, Davis Monthan AFB, and Forbes AFB. It was retired in August 1964 and given to the navy as a drone target. It was recovered from China Lake and trucked to March Museum in 1988. This aircraft is on loan from the NMUSAF