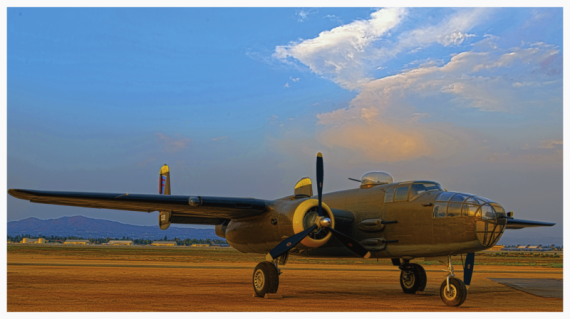 This versatile United States Army Air Force twin-engine, double tail medium bomber was built by North American Aviation. Named in honor of General William "Billy" Mitchell, an aviation pioneer and early proponent of the value of aerial bombardment, B-25 Mitchell’s served with distinction in every theater of war throughout World War Two. Designed as a level-flight, medium bomber the Mitchell excelled in a variety of missions including low level ground attack and anti-shipping.

Perhaps the aircraft’s most famous mission occurred in April of 1942, when Lt. Col. James H. Doolittle, led one of the most daring missions of the war. Only five months after the surprise attack on Pearl Harbor, Doolittle led 16 B-25 Mitchell bombers, launched from the deck of the United States Navy aircraft carrier Hornet, on a raid striking military targets in Tokyo, Yokohama, Kobe, and Nagoya, Japan. Completely surprising the Imperial Japanese, Lt. Col. Doolittle's raiders brought a much-needed morale boost to the United States at a time when US confidence was at its lowest ebb.

The museum's B-25J, serial number 44-31032, was delivered to the Army Air Force in 1945 and put into storage until 1947.  It was assigned to Vance AFB as a TB-25J and TB-25N for pilot training until retirement in 1958.  The aircraft was then sold and registered as N3174AG.  It participated in the 1970 Paramount Pictures film adapted from Joseph Heller’s classic anti-war novel Catch -22, with the nose art “Free, Fast and Ready”. The aircraft is on loan from the NMUSAF

According to the Air Force Historical Research Agency (AFHRA/RSA), Maxwell
AFB, AL, the museum's B-25J has the following history:

Manufactured by North American Aviation, Kansas City KS and delivered to the
USAAF on 29 Mar 1945.