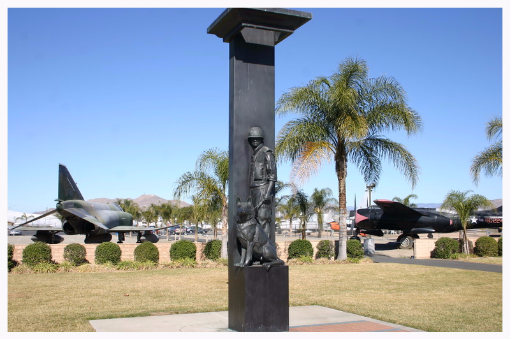 In 1999 the Discovery Channel aired the documentary "War Dogs – America's Forgotten Heroes." Soon after Jeff Bennett, founder of Nature's Recipe, spearheaded a fundraising campaign raising over $1 million for the creation of two War Dog Memorials. A year later on a cold and rainy February morning, before a crowd of 2,000 people, the West Coast War Dog Memorial was dedicated at the March Field Air Museum. The monument was created by sculptor Tom Schomberg whose other works include the Rocky Monument which stands in front of the Philadelphia Museum of Art, and the Veterans Memorial located at the Riverside National Cemetery (just across Interstate 215 from the March Field Air Museum).

"The War Dog Memorial, as I created it, is meant to illustrate the bond between humans and their canine friends. Second, and most importantly, it is to illustrate the sacrifice that
these two figures have made under combat circumstances." - Tom Schomberg, Sculptor

Since the Memorial's original dedication in 2000, the March Field Air Museum has held a War Dog Memorial Ceremony in February to honor our military canine heroes and their handlers that served in battle. The second War Dog Memorial is located at Fort Benning, Georgia.

Inscribed tiles are being placed on the concrete surface around the sculpture. The museum is currently taking orders for those who want to sponsor these inscribed tiles. Cost is $50 for a tile with one line line or $75 for a tile with two lines. To request sponsorship of a tile, please click the link below.

Video of the 2000 Dedication Ceremony below