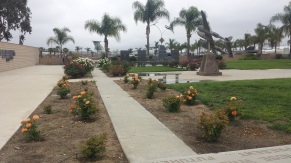 This garden of "Rosie the Riveter" hybrid Floribunda roses is new as of 2018. It joins the museum's other memorials and monuments as a salute to women during World War II.

Rosie the Riveter is a cultural icon of World War II, representing the women who worked in factories and shipyards during the war. These women sometimes took entirely new jobs replacing the male workers who joined the military. Although most women took on male dominated trades during World War II, they were expected to return to their everyday housework once men returned from the war. Over 6 million women got war jobs, many of them producing munitions and war supplies. African American, Hispanic, white, and Asian women worked side by side, motivated by colorful posters and popular slogans like “We Can Do It!”

In an effort to ensure the contributions of “Rosies” are fully acknowledged, “Keeping the Spirit of ‘45 Alive,” a national collaborative, is leading the campaign to create a living memorial in the form of a U.S. network of Rosie the Riveter Memorial Rose Gardens. Some 36 gardens in 15 states are currently under development, with the Rosie the Riveter Memorial Rose Garden at the March Field Air Museum becoming one of the newest. These inaugural gardens form the initial backbone of an expanding national network of gardens; the Spirit of ’45 collaborative has established a goal of locating at least one in each Congressional District in time for the 75th anniversary of the end of WWII, in 2020. Featuring a new, official Rosie the Riveter rose varietal, the garden at March Field Air Museum is a proud part of this national memorial.