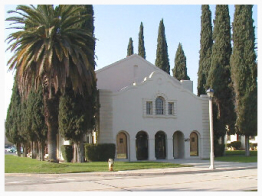 On December 19, 1979, Lt. General James P. Mullins, 15th Air Force Commander, delivered an address at the dedication ceremony for the new March Air Force Base Museum. The new museum was initially housed in the 1930 Base theater (shown here), located just north of the Base's parade ground.

The museum's 2,000 square foot main exhibit area was filled with photographs, models and paintings depicting military aviation and the history of March Air Force Base (AFB) from its founding in 1918. An aircraft park, to feature aircraft that once flew from March, was established near the main gate at Cactus and Graham. "It's important to capture the essence of our past and to portray and illustrate the history of March Field." said Major Brian Daly, the museum's first director.

1) The March Field Museum was officially recognized as an Air Force Facility in March.

2) The non-profit March Field Museum Foundation was established in May.

3) in November, the outdoor aircraft park (featuring three aircraft) was opened to the public.

The new museum grew by leaps and bounds, so much so that within a year the number of artifacts doubled and filled the theater building to capacity. On February 20, 1981, the March Field Museum's first exhibit facility opened its doors to the public in Building 420--the former commissary. The 26,000 square foot building housed offices and smaller collections, plus two or three smaller aircraft. Most of the approximately 50 airplanes were located on a parking ramp on the March AFB flightline.

The museum today operates as a public benefit, 501(c)3 nonprofit organization. It relies on donations, grant funding, and earned income to continue serving the public, and does not receive ongoing funding from any government entities. After a rigorous process, March Field Air Museum received accreditation from the American Alliance of Museums in 2011. The museum joined an elite group of only 3% of American museums that are accredited. Also in 2011, the museum opened a new 12,000 square foot addition housing educational programs and the museum library, and creating room for private rental events.

In 2016 and 2017, as the Centennial of March Field approached, the museum reinstalled the exhibits in its Main Gallery, opened a changing exhibit gallery space, and launched major improvements throughout its public areas. The 2018 Centennial has been a fantastic opportunity for the museum to showcase the incredible history of an Air Force icon. The oldest continuously operated military airfield on the West Coast, March Field (today's March Air Reserve Base) also is a birthplace of the modern Air Force that our nation relies upon today.