History of March Air Reserve Base 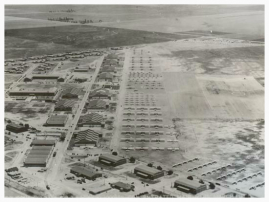 The story of March Field began at a time when the United States was rushing to build up its military forces in anticipation of an entry into World War I. News from the front in Europe had not been good as it explained for those at home the horror and boundless human misery associated with stalemated trench warfare. Several European news sources reported significant German efforts at this time to build a fleet of flying machines that could well alter the nature of modern warfare and possibly carry the war to the skies. In response, Congressional appropriations in early 1917 in the neighborhood of $640,000,000 attempted to back the plans of General George O. Squier, the Army's chief signal officer, to "put the Yankee punch into the war by building an army in the air." At the same time the War Department announced its intentions to build several new military installations. Efforts by Mr. Frank Miller, then owner of the Mission Inn in Riverside, Hiram Johnson and other California notables, succeeded in gaining War Department approval to construct an airfield at Alessandro Field located near Riverside, an airstrip used by aviators from Rockwell Field on cross-country flights from San Diego. A parade in Riverside on February 9, 1918, gave notice than an army flying field would soon be coming to Riverside.

The Army wasted no time in establishing a new airfield. Sergeant Charles E. Garlick, who had landed at Alessandro Field in a "Jenny" in November, 1917, was selected to lead the advance contingent of four men to the new base from Rockwell Field. On February 26, 1918, Garlick and his crew and a group of mule skinners from nearby Colton, known to be experts in clearing land as well as for their colorful syntax, began the task of excavating the building foundations at Alessandro. On March 20, 1918, Alessandro Flying Training Field became March Field, named in honor of Second Lieutenant Peyton C. March, Jr., son of the Army Chief of Staff, who had been killed in a flying accident in Texas the previous month. By late April, 1918, enough progress had been made in the construction of the new field to allow the arrival of the first troops. The commander of the 818 Aero Squadron detachment, Captain William Carruthers, took over as the field's first commander and for a time operated out of an office in the Mission Inn. Within a record 60 days the grain stubble-covered plain of Moreno Valley had been partially transformed to include 12 hangers, six barracks equipped for 150 men each, mess halls, a machine shop, a post exchange, a hospital, a supply depot, an aero repair building, bachelor officer's quarters and a residence for the commanding officer. On May 15 when the first JN-4D "Jenny" took off, March Field seemed to have come into its own as a training installation. The signing of the armistice on November 11, 1918, did not halt training at March Field initially but by 1921, the decision had been made to phase down all activities at the new base in accordance with sharply reduced military budgets. In April, 1923, March Field closed its doors with one sergeant left in charge.

March Field remained quiet for only a short time. In July, 1926, Congress created the Army Air Corps and approved the Army's five-year plan which called for an expansion in pilot training and the activation of tactical units. Accordingly, funds were appropriated for the reopening of March Field in March of 1927. Colonel William C. Gardenhire, assigned to direct the refurbishment of the base, had just directed his crews to replace underpinnings of many of the previous buildings when he received word the future construction would be in Spanish Mission architectural design. In time, March Field would receive permanent structures. The rehabilitation effort was nearly complete in August, 1927, when Major Millard F. Harmon reported in to take over the job of base commander and commandant of the flying school. Classes began shortly after his arrival. In the months ahead Air Force leaders such as Hoyt Vandenberg, Nathan Twining, Thomas Power and Curtis LeMay completed their initial flight training at March Field. The base, however, was about to enter a new era.

As March Field began to take on the appearance of a permanent military installation, the base's basic mission changed. When Randolph Field began to function as a training site in 1931, March Field became an operational base. Before the end of the year, the 7th Bomb Group, commanded by Major Carl A. Spaatz, brought its Condor B-2 and Keystone B-4 bombers to the picturesque field. The activation of the 17th Pursuit Group and several subordinate units along with the arrival of the 1st Bombardment Wing initiated a period where March Field became associated with the Air Corp's heaviest aircraft as well as an assortment of fighters. In the decade before World War II, March Field took on much of its current appearance. It also became more than a place hard to find on aerial maps of Southern California. Lieutenant Colonel Henry H. (Hap) Arnold, base commander from 1931 to 1936, changed this. Through well-publicized maneuvers to Yosemite, Death Valley and other sites in California, a visit by Governor James Rolph in March 1932, numerous visits by Hollywood celebrities including Bebe Daniels, Wallace Berry, Rochelle Hudson and others, and visits by famous aviators including Amelia Earhart, March Field gained prominence. Articles in Los Angeles newspapers kept March Field in the news and brought to it considerable public attention. The completion of the first phase of permanent buildings in 1934 added to the scenic quality of the base. This was also a period of outstanding achievements in test flights and other contributions to the new science of aviation. Dusty March Field had come a long way in one decade. The attack on Pearl Harbor in December of 1941 quickly brought March Field back into the business of training air crews. Throughout the war many soon-to-be-famous bombardment groups performed their final training at March before embarking for duty in the Pacific. During this period the base doubled in area and at the zenith of the war effort supported approximately 75,000 troops. At the same time, the government procured a similar-sized tract west of the San Diego highway that bordered the base and  established Camp Haan as an anti-aircraft artillery training facility. It supported 85,000 troops at the height of its activity. For a time, March Field remained a bust place indeed. In 1946, Camp Haan became a part of March's real estate holding when operations at the base returned to a more normal setting.

After the war, March reverted to its operational role and became a Tactical Air Command base. The main unit, the famed 1st Fighter Wing, brought the first jet aircraft, the F-80, to the base. This deviation from the traditional bombardment training and operations functions did not long endure. In 1949, March became a part of the relatively new Strategic Air Command. Headquarters Fifteenth Air Force along with the 33d Communications Squadron moved to March from Colorado Springs in the same year. Also in 1949, the 22d Bombardment Wing moved from Smoky Hill Air Force Base, Kansas to March. Thereafter, these three units remained as dominant features of base activities.

From 1949 to 1953, the B-29 Superfortresses dominated the flightline at March Air Force Base. For four months, July to October, the 22d saw action over Korea and in this brief period, contributed to the elimination of all strategic enemy targets. Involvement in the Korean Conflict had no sooner ended when the wing converted from the huge propeller-driven B-29s to the sleek B-47 jet bombers and their supporting tankers, the KC-97s. The KC-97s belonging to the 17th and 22d Air Refueling Squadrons represented an amazing jump in technology. Planes and crews from March began breaking altitude and distance records. The new refueling planes introduced a significant advance in operational range. Overall operational capability could now be measured in global terms. This had been demonstrated earlier when General Archie Old, the Fifteenth Air Force commander, had led a flight of three B-52s in a non-stop around-the-world flight termed "Power Flight" in just 45 hours and 19 minutes. Ceremonies upon their arrival at March on January 18, 1957, emphasized the global reach of the Strategic Air Command.

In 1960, the first Reserve unit was assigned to March, flying C-119s. The end of the 1960s saw March Air Force Base preparing to exchange its B-47s and KC-97s for updated bombers and tankers. Increasing international tensions in Europe and elsewhere by September 16, 1963, brought March its first B-52B bomber, "The City of Riverside." Soon 15 more of the giant bombers appeared on the flightline along with new KC-135 jet "Stratotankers." March's first KC-135, "The Mission Bell" arrived on October 4, 1963. For the next twenty years this venerable team would dominate the skies over what had come to be called the Inland Empire as the 22d Bombardment Wing played a feature role in the Strategic Air Command's mission.

During this period both tankers and bombers stood alert at March as part of America's nuclear deterrent force. The might of March's bombers and tankers, however, were soon to be used in quite another scenario. During the conflict in Southeast Asia, the 22d Bombardment Wing deployed its planes several times and March crews learned well the meaning behind such names as Young Tiger, Rolling Thunder, Arc Light and Linebacker II. In these troubled years the base served as a logistical springboard for supplies and equipment en route to the Pacific. Near the end of the conflict, March operated as one of the reception centers for returning prisoners of war.

Following the end of hostilities in Southeast Asia, the 22d returned to its duties as an integral part of the Strategic Air Command. For the next eighteen years until 1982, March effectively supported America's defensive posture. The occurred through several post-Vietnam adjustments. One of these brought the retirement of the wing's last B-52 on November 9, 1982. This event signaled yet another era for March Air Force Base and for the 22d. The 22d
Bombardment Wing , so long a key ingredient in March's long history, would become an air refueling wing with the new KC-10 tanker. The new tankers, able to accomplish considerably more than the KC-135s, promised a new tomorrow for the Strategic Air Command. Within months after the first KC-10 arrived at March on August 11, 1982, crews quickly realized the ability of the new aircraft to carry cargo and passengers as well as impressive fuel loads over long distances. Air refueling for March Air Force Base had entered a new age. The California Air National Guard also arrived in 1982, bringing with them the F-4C's.

Beginning in the early 1980s the KC-10 became the vehicle carrying March Air Force Base into a new technological epoch. The large KC-10s with their versatility and their dependability again gave the base a featured part in America's efforts to retain a strong and flexible military air arm. The utter importance of the KC-10s in conventional operations became a particularly apparent during Desert Shield and Desert Storm where their outstanding service contributed measurably to the success of American forces in the defense of Saudi Arabia and the liberation of Kuwait.

In 1993, March Air Force Base was selected for realignment. In August 1993, the 445th Airlift Wing transferred to March from Norton AFB, Calif. On January 3, 1994, the 22d Air Refueling Wing was transferred to McConnell AFB, Kansas, and the 722d Air Refueling Wing stood up
at March. As part of the Air Force's realignment and transition, March's two Reserve units, the 445th Airlift Wing and the 452d Air refueling Wing were deactivated and their personnel and equipment joined under the 452d Air Mobility Wing on April 1, 1994.

On April 1, 1996, March officially became March Air Reserve Base. From the dusty stubble that once was Alessandro Flying Strip to today, March, for over 70 years, has been a key element in the advance of aviation and in the growth of the modern Air Force. As the Air Force restructures and prepares for new challenges, March seems destined to remain as an important base for the air operations of tomorrow.