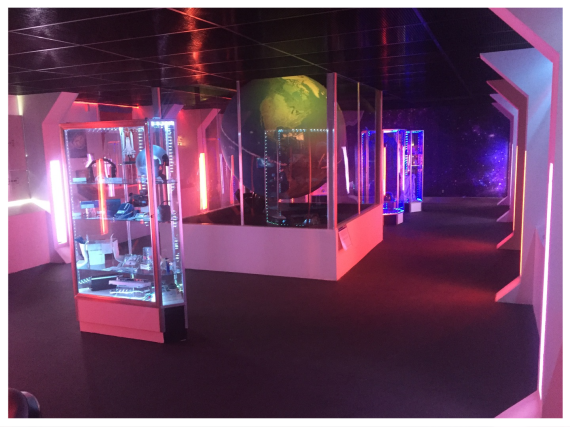 Earth is the cradle of humanity, but one cannot live in the cradle forever.

On October 4, 1957, a faint beeping announced to the world that man had entered the Space Age. A tiny satellite, less than two feet in diameter made 1,440 orbits around the earth. Sputnik, Russian for 'companion,' focused attention on the outer reaches of aviation--the next yet-to-be conquered, and still mysterious, realm of Space. A month later Laika, a stray dog, became the first earthling in orbit.

The Space Race was on.

Less than a year after the Sputnik launch, NASA (the National Aeronautic and Space Administration) came into being with the implied purpose of closing the technological gap between the Soviets and the Western democracies. In April 1961, Russian cosmonaut Yuri Gagarin completed one complete earth orbit. Within a month, Mercury Astronaut Alan Shepard became the first American in space, followed a year later by John Glenn, the first American to orbit the earth.

Perpetually one step behind the Russians in public perception, America leapt ahead by setting the goal of placing a man on the moon before the end of the decade. On July 20, 1969, the world held its breath as Astronaut Neil Armstrong stepped from Lunar Lander "Eagle" onto the surface of the Moon. His words remain etched in our minds even today:

"One small step for man, one giant leap for mankind."

In the following decades, the exploration of Space became a universal triumph. The International Space Station and the Space Shuttle Program became multi-national; mankind looked beyond competition to the betterment of all humanity. The journey continues today.