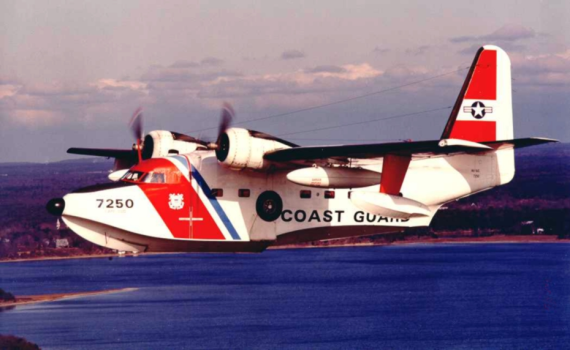 March Field Air Museum is proud to announce the latest installment of “Up-Close Aircraft Days” on Saturday, March 14, 2020, from 11 a.m. to 3 p.m. As part of the interpretive new program, a different aircraft is featured each month with the next focused on the SA-16 Albatross amphibian.

The Grumman-built general utility amphibian SA-16 with a crew of five, can operate from land, water, or ice and snow. Automatically inflated life rafts are carried, two in the cabin and one in a compartment in top of the hull. Cabin seating for transport of 10 to 22 passengers can be altered to accommodate 12 litters or cleared to carry over 460 cubic feet of cargo.

Built to U.S. Navy specifications, the "Albatross" served with the U. S. Air Force, Navy, Coast Guard, and numerous allied air forces. Almost exclusively used for Search and Rescue (SAR), Albatrosses played an important role in both Korea and Vietnam by rescuing downed airmen. In service with the United States Coast Guard, the SA-16 flew long-range over-water search and rescue missions. Capable of anything from ice flow surveillance in the North Atlantic to anti-shipping/customs patrols in the Pacific, the Albatross is a very versatile amphibian.

Over 450 Albatross aircraft were built since 1949. SA-16s were flown by the USAF, the U.S Navy, and Coast Guard, and by Canada, Japan, Brazil, Chile, Italy, Nationalist China, the Philippines, Portugal, and Spain.

The museum's Albatross, serial number 1293, was a USCG HU-16E and was last flown by the Coast Guard from Cape Cod, Maine in 1971. The aircraft was in storage for ten years when, after four days of repair, it was flown to March Field Air Museum.

Each “Up-Close Aircraft Days” opportunity will be available from 11 a.m. to 3 p.m. on the scheduled date (Museum hours are 9 a.m. to 5 p.m.) and is included with regular Museum admission: $12 for guests ages 12 years and older; $10 for Veterans, $6 for children ages 5 to 11 years; and free for ages 4 and younger. In case of inclement weather, other aircraft may be substituted. March Field Air Museum is a top-rated TripAdvisor attraction located alongside Interstate Highway 215 at Van Buren Boulevard, just south of downtown Riverside and adjacent to March Air Reserve Base. For more information about the Museum, please call 951-902-5949 or visit www.MarchField.org