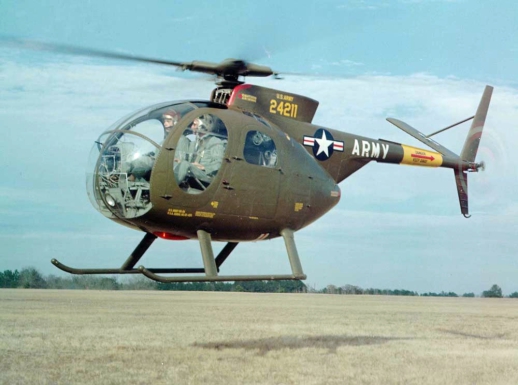 March Field Air Museum is proud to announce the latest installment of “Up-Close Aircraft Days” on Saturday, February 8, 2020, from 11 a.m. to 3 p.m. As part of the interpretive new program, a different aircraft is featured each month with the next focused on the Hughes OH-6A Cayuse. On the second Saturday of each month throughout the year, Museum guests will have the opportunity for a close-up look – sometimes climbing stairs to get a close-up view into the cargo bay or cockpit - other times even climbing aboard.

Designed as a military scout the OH-6A is an extremely maneuverable light observation helicopter initially fielded by the United States Army in Vietnam in early 1968. The teardrop shaped Hughes OH-6A was used for command and control, observation, target acquisition, and reconnaissance. Small, light, sturdy, and maneuverable the helicopter had very low drag. The OH-6A Cayuse was quite effective when teamed with the AH-1G Cobra attack helicopter as part of what were known as "Pink Teams". The OH-6A would locate targets by flying low, enticing the enemy to fire, and then marking the hostile position with colored smoke. The Cobra would attack using the smoke as a guide.

The Cayuse could absorb an extensive amount of small arms fire and still bring the crew home safely. The OH-6A could be armed with the M27 armament subsystem, the port (left) side mounting M134 six-barrel 7.62mm Minigun or a 40mm grenade launcher on the XM8 armament subsystem. In addition, an M60D 7.62mm machine gun could be mounted in the rear starboard (right) door opening.

The museum’s OH-6A helicopter serial number 68-17252, was built by Hughes and delivered to the US Army in October 1969. First assigned to the 25th Infantry in Vietnam by 1971 it was assigned to the 1st of the 9th Cav "C" Charlie troop. It returned to the United States later in 1971 after accumulating 1,340 combat hours. During this time, it was shot down 4 times and had 2 non-combat accidents.

Following military service with the New York Army Guard, the aircraft was transferred through the GSA Law Enforcement support program to Riverside County Sheriff’s Office and then, in 2001, to the museum.