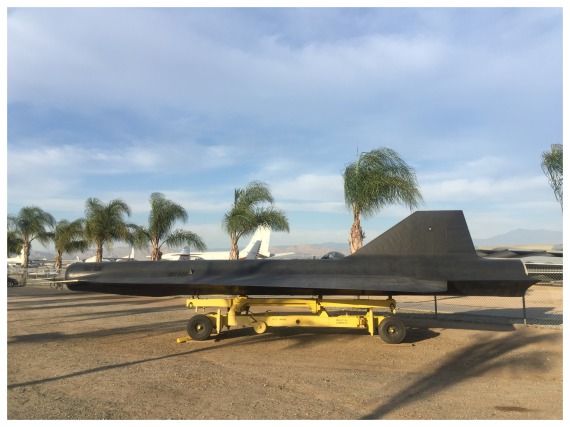 Created during the height of the Cold War, the Lockheed D-21 Strategic
Reconnaissance Drone is a high-speed, high-altitude unmanned aircraft using many technical innovations derived from the SR-71 Blackbird. The D-21 powered by the RJ43-MA20S-4 ramjet was designed to carry a single high-resolution camera capable of taking critically important detailed photographs from altitudes exceeding 90,000 feet over hostile territory and return without endangering human aircrews.

In the heated political atmosphere following the 1960 Soviet destruction of a
CIA U-2 spy plane piloted by Francis Gary Powers, the United States searched for an alternative to manned reconnaissance flights over its technologically advanced competitors. By 1962, aviation genius Kelly Johnson the designer of the SR-71 and his famous Lockheed “Skunk Works” believed the solution lay in the D-21. Capable of speeds of Mach 3.5 the D-21, (initially designated Q-21) used cutting-edge design to reduce its radar cross-section making it virtually invisible to eastern bloc surveillance networks. Launched from an upper surface pylon of a modified high-speed CIA reconnaissance version of the SR-71 the A-12, the D-21 could penetrate foreign airspace along a pre-set flight pathbefore returning to a secure area and ejecting an electronics module containing the camera, photographs and navigational systems. Following completion of its mission the D-21 was programed to self-destruct.

In late December 1964, under the codename "Tagboard" the D-21 and the modified two-seat version of the A-12, the M-21 (D indicated "daughter" and M "mother") combination flew with the D-21 mounted piggyback on the M-21’s upper surface. It would be more than a year before the first successful in-flight launch in March of 1966. Two more launches took place in 1966 however, hydraulic failure caused the loss of the drone on the second mission and the electronics module failed to release on the third. Heartened by what seemed to be minor deficiencies, the tests continued despite designer Kelly Johnson’s expressed concern over the complex and risky M-21/D-21 combination launch procedures. July30, 1966 disaster struck over the Pacific test range when on the fourth test the D-21 engine failed immediately after separation causing the drone to veer into the right wing of the mother ship. At over Mach 3, the M-21 pitched-up sharply, breaking-off the forward fuselage containing the crew. Both the pilot Bill Park and Launch Control Operator ejected however, LCO Ray Torick was severely injured in the bailout and drowned before recovery vessels could reach him.

Seeking a safer launch, the D-21 was modified into the D-21B by adding solid rocket booster underneath the drone to propel it above Mach 2 for initial engine start, the dorsal mounting attachments for connecting to the under wing pylons of two specially modified B-52H bombers. Much safer, the “Senior Bowl” program was still plagued by difficulties. In total, four operational missions were flown; all over the People’s Republic of China between 1969 and 1971. The first resulted in a D-21 guidance system malfunction causing the drone to fly on past China into the Soviet Union where it crashed, only to be recovered by the KGB. The second flight performed flawlessly until the electronics module recovery system was damaged during ejection and the module plunged to the bottom of the sea. After a perfect third flight, the US Navy ship sent to scoop-up the module inadvertently rammed the floating unit causing it to sink. During the fourth and final D-21B flight, a malfunction caused the drone to wander off course; it disappeared into the vastness of communist China’s Gobi desert. President Nixon cancelled the program later that year.