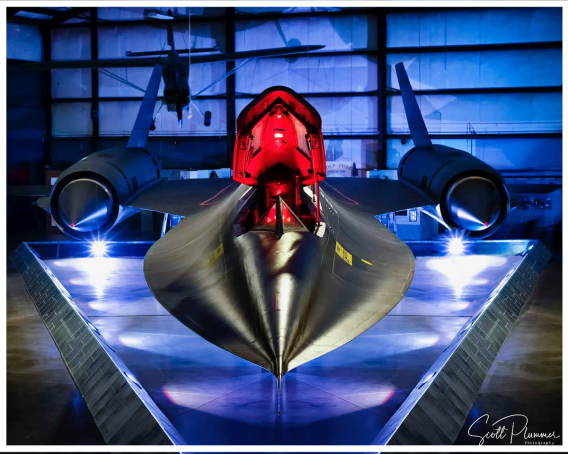 More than five decades after its development, the sleek, futuristic Lockheed SR-71 “Blackbird” remains the fastest air-breathing, manned aircraft in the world. Designed by Lockheed engineers assigned to the Advanced Development Program under the leadership of Kelly Johnson, one of the twentieth century’s most inspired aircraft designers, the SR-71 filled a desperate need for reliable strategic reconnaissance during the Cold War.

The Blackbird’s unique design evolved from the challenges of meeting the goal of operating beyond the range of interception in both speed and altitude. In 1976, more than ten years after its first flight the SR-71 set two world records for its class with a speed of 2,193.167 mph and an altitude of 85,068.997 feet.

Nearly every section of the SR-71 required innovation; from the Pratt & Whitney J-58 engines generating 32,500 pounds of thrust incorporating a sophisticated air inlet control system to adjust the engine intake airflow for peak performance at sustained flights above Mach 3, to titanium alloys and specialized design features that permitted the aircraft to dissipate heat and expand to accommodate surface temperatures exceeding 1000 degrees F. The flared design of the “chines”, the cheek pieces extending along the nose flowing into the aircraft wings, provided lift and improved controllability while contributing to the low radar cross- section combined with specialized paint and radar absorbing composites making the SR-71 one of the first aircraft to use stealth technology.

Equipped with sophisticated cameras and sensors the SR-71 could map 100,000 square miles per hour while using its speed and altitude capabilities to stay safely beyond reach. Securing its position as the most successful strategic reconnaissance aircraft in history, the SR-71 gathered information for the United States throughout the Cold War, Vietnam and during conflicts and crises worldwide until its retirement from active service in 1998. Thirty-two SR-71s and her variants were produced; none was ever lost to hostile action.

The advent of unmanned aerial vehicles, improvements in satellite surveillance and the increased capability of potential opposition in the form of advanced fighters and surface to air missiles spelled to end of the SR-71’s operational life.

March Field Air Museum's SR-71, 61-7975, was delivered to the United States Air Force in 1967. A veteran of the Vietnam War, 61-7975 flew 82 sorties during the conflict and numerous other missions over hot spots throughout the world. It is on loan from the National Museum of the USAF.