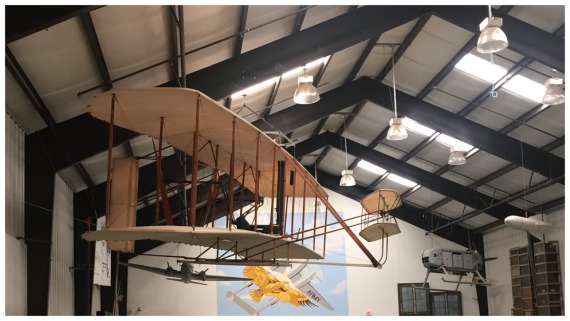 A sea change in aviation technology, the 1903 Wright Flyer was the first successful powered, heavier than air aircraft. As the first, the Wright Flyer represents the transformation of aviation from a dream to reality.

Four years of intensive research and development, including the use of wind tunnel testing and practical flight tests, occurred before the Wright Brothers achieved their goal on Dec. 17, 1903 at Kitty Hawk, North Carolina. At the controls of the Wright Flyer, Orville made the first successful flight covering 120 feet in 12 seconds. With Wilbur at the controls, the Flyer extended the achievement to 852 feet in 59 seconds.

The Los Angeles Section of the American Institute of Aeronautics and Astronautics (AIAA) built the museum's full-scale replica of the 1903 Wright Flyer between 1979-1993 using plans from the original Wright Flyer published by the Smithsonian Institution in 1950. Constructed in advance of the 100th anniversary of the Wright Brothers first flight, the replica was intended for wind tunnel testing to provide a historically accurate aerodynamic database of the Wright Flyer design.

Prior to being on display at the museum, the Wright Flyer model was exhibited throughout the country during the Wright Brothers First Flight Centennial in 2003 and displayed at the FAA Regional Headquarters at Lawndale, CA.

The museum's Wright Flyer model has a 40-foot 4-inch wingspan reinforced with piano wire, cotton wing coverings, spruce propellers, and a double rudder just as the original. Although the model exactly replicates the 1903 Wright Flyer in design, size, appearance, and aerodynamics, changes were made to strengthen the replica for the wind tunnel tests carried out at NASA Ames in 1999.

The Flyer arrived at the museum in June 2018.