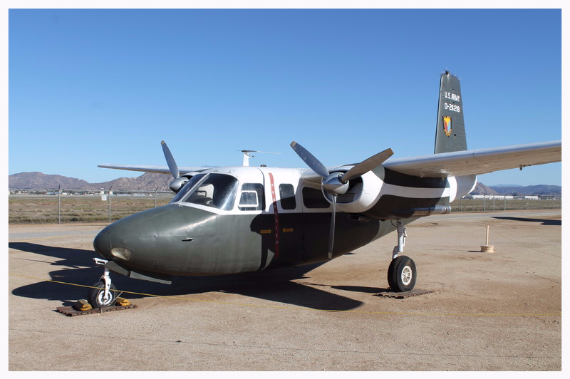 The Aero Design and Engineering Company, a subsidiary of Rockwell-Standard Corporation formed in December of 1944 in Culver City, CA, produced a twin-engine executive aircraft prototype called the Aero Commander. Its first flight was on April 23, 1948. The first production version was the Aero Commander 520 Transport. This version received its Approved Type Certification on January 31, 1952. The first production aircraft was delivered on February 5, 1952.

These aircraft were used primarily for VIP transport duties. In the civilian world, Aero Commanders gained great popularity as mid-range business and light-cargo transports. They were also exceptionally popular with narcotics smugglers who appreciated their large load capacity, range and light footprint which permitted them to land on unimproved strips. Throughout the main part of its military career in the 1950s, the Aero Commander was known as the L-26.

The museum's aircraft (52-6218) was an Army YL-26A liaison aircraft from 1952 until the Pentagon system for aircraft designations was overhauled on October 1, 1962, and it became a U-9A. It flew as a US Army U-9A and was last stationed at Fort Eustis, VA. In May 2002, the aircraft was restored to its original US Army U-9A green and white paint scheme. This aircraft is on loan from the NMUSAF