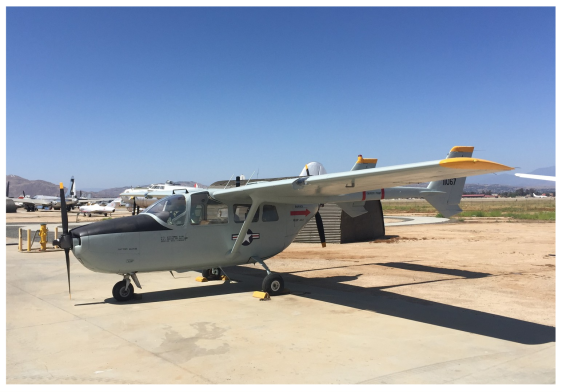 In 1967, the Air Force completed an exhaustive search for an improved observation aircraft to replace the aging O-1 aircraft used by Forward Air Controllers in Vietnam. Already on the production line, the Cessna 337 Super-Skymaster was a popular twin-engine, four-seat general aviation aircraft with a unique push-pull design. Engines mounted on the forward and rear of the fuselage gave the C-337 the extra power and reliability of two engines while retaining the advantage of centerline thrust and a high wing, making it an excellent platform for observation missions. Minor alterations, the installation of a gunsight, under-wing pylons, a smoke generator; glass panels in the lower starboard door and a loudspeaker for psychological warfare and the C-337 was transformed into the inexpensive and versatile O-2 Skymaster.

The museums O-2B Super Skymaster served in Vietnam and Laos.  After the war it was used by the California Department of Forestry as a fire spotter and command aircraft