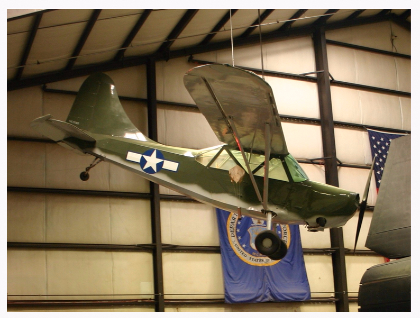 The Stinson L-5 Sentinel is a small, unarmed two-place liaison airplane used by the U.S. Army, Marine Corps, and the British Royal Air Force during World War II. Manufactured in Wayne, Michigan by the Stinson Division of the Vultee Aircraft Company (Consolidated-Vultee after March 1943) it was designed as a low-cost replacement for their larger and more complex L-1 Vigilant.

Development began in late 1940, with the prototypes first flight in June 1941 under the Vultee designation V-76. After undergoing accelerated military field trials, it was selected as the standard liaison aircraft for use by the USAAF as the O-62, its designation changed to L-5 when the liaison category of aircraft was established in 1942. The first of 3,590 production L-5s rolled off the assembly line in November that same year.

Six versions of the Sentinel were produced between November 1942 and August 1945. The first was the L-5 observation model. Next was the L-5B cargo / ambulance version introduced in January 1944. In January 1945, a vertical mount for a K-20 aerial camera was added behind the observer's seat, requiring minor structural changes. Next came the L-5E ambulance in March 1945 with ailerons that could be manually lowered 15 degrees for improved slow-speed handling. The L-5E-1 revision added heavy duty brakes and larger wheels and tires for better short and rough-field performance. A single L-5B modified with a 24-volt electrical system and new radio package was designated XL-5F. It served as the prototype for the final production version of the Sentinel called the L-5G that also saw a 5-horsepower increase with the O-435-11 engine.

The museum’s L-5 (on loan from the NMUSAF) Vultee s/n 76-249, was delivered to the USAAF as 42-15046 on May 24, 1943. It was second-to-last of the first 250 Sentinels originally ordered under the designation O-62. Initially sent to Morris Field near Charlotte, NC it was most likely assigned to the 121st Liaison Squadron. It later also served in a training capacity with the 2nd Air Commando Group in Florida and 162nd Squadron in Louisiana. It finished its active service flying forest fire patrols with the 161st Liaison Squadron in Washington and Oregon. On November 22, 1945, it was transferred to the Reconstruction Finance Corporation for disposal as surplus war material.