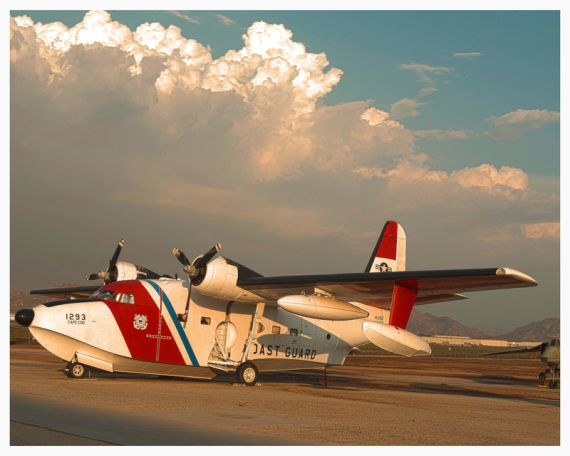 The Grumman Model G-64 prototype Albatross first flew on October 24, 1947 and was designated the SA-16 by the USAF. In 1962, all designations were combined in the multi-service system as the HU-16.

The Grumman-built general utility amphibian SA-16 with a crew of five, can operate from land, water, ice or snow. Automatically inflated life rafts are carried, two in the cabin and one in a compartment in the top of the hull. Cabin seating for transport of 10 to 22 passengers can be altered to accommodate 12 litters or cleared to carry over 460 cubic feet of cargo.

Built to U.S. Navy specifications, the "Albatross" served with the U. S. Air Force, Navy, Coast Guard, and numerous allied air forces. Almost exclusively used for Search and Rescue (SAR), they played an important role in both Korea and Vietnam by rescuing downed airmen.

In the United States Coast Guard service, the SA-16 flew long range over-water search and rescue missions. Capable of ice flow surveillance in the North Atlantic to anti-shipping/customs patrols in the Pacific, the "Albatross" is a very versatile amphibian. Over 450 were built starting in 1949. In addition to the US armed forces, SA-16s were flown, and by Canada, Japan, Brazil, Chile, Italy, Nationalist China, the Philippines, Portugal, and Spain.

The museum's Albatross, serial number 1293, was an HU-16E and was last flown by the U.S. Coast Guard with "Cape Cod" markings. It was in storage for ten years when, after four days of repair, it was flown to our museum in 1981

The museum aircraft, serial number 1293, served with the U.S. Coast Guard and arrived after retirement in 1961. This aircraft is on loan from the NMUSAF.