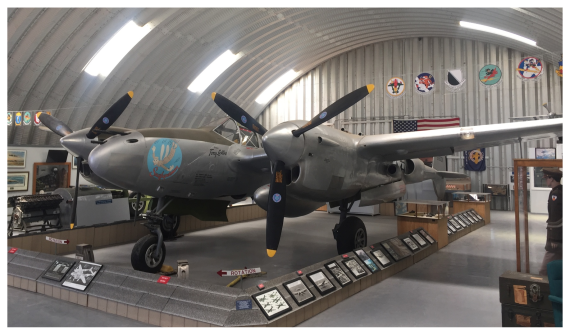 The Lockheed P-38 made its first flight from here at March Field in January of 1939.  The Burbank-based company hoped the Army Air Corps would buy 50 of its new high-altitude interceptors.  World War II broke out later that year and nearly 10,000 P-38’s would roll off the assembly line.

The P-38 made its combat debut in 1942.  It was heavily armed with four .50 machine guns and a 20mm cannon plus underwing bombs and rockets.  The Lightning (a name bestowed by the British who never flew it in combat) was incredibly versatile; it could be a bomber escort, a fighter-bomber, a night fighter or—designated F-4 or F-5—a photo reconnaissance platform.  The Germans were so impressed that they dubbed the P-38 “der Gabelschwanz Teufel,” the Fork-tailed Devil.

The P-51 replaced the P-38 in the 8th Air Force but it excelled in the Mediterranean and, especially, in the Pacific where pilots—who spent much of their time flying over water—appreciated the safety of its twin Allison engines.  The two top-scoring American aces, Majors Richard Bong (40 Japanese aircraft destroyed) and Thomas McGuire (38) scored all of their victories while flying P-38’s.  Lightnings carried out one of the most remarkable missions of World War II: the interception and shoot down of Admiral Isoroku Yamamoto, the commander of the Imperial Japanese Navy and mastermind of the Pearl Harbor attack.

The National P-38 Association has its facility here on the museum grounds.  It displays a full-size replica of the classic twin-boom fighter in the Quonset hut just south of Firebase Romeo Charlie.