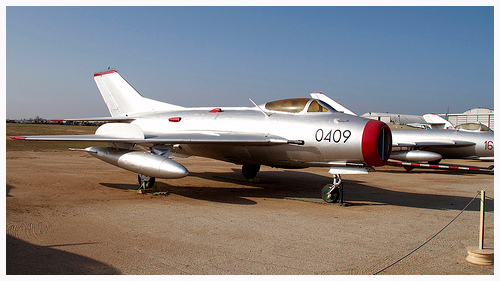 This Soviet aircraft was first seen publicly in a formation of 48 in the 1955 Soviet Aviation Day fly-by. The MiG-l9 came from the successful design bureau of Artem Mikoyan and Mikhail Gurevich. The dramatic 55-degree sweep, and twin engines gave this aircraft excellent performance and speed. It was comparable to the U.S. F-100 Super Sabre.

The Mig-19 was also licensed for production in China and it equipped most Soviet Eastern Bloc countries throughout the 1960's. China even abandoned its newer Mig-21's and returned to producing Mig-l9's.

The museum’s Mig-19 was donated in October 2001, from Lillie Hornak, Palm Springs, CA. arriving at the museum in pieces from the Chino airport, it was assembled by museum volunteers. It had come to Chino from Communist China where a private plane collector had purchased the equivalent of seven aircraft. Papers with the aircraft indicated it had served in Vietnam, before being flown by Chinese pilots and then utilized as a training fuselage for mechanics.